Its every artists’ dream to create something that is well received, and to earn a living off of doing something that they love. The latest Presidential portraits are evidence of this. These portraits are not your typical portraits of presidents and their first ladies, but they are not the first unique ones.
I remember visiting the White house as a teenager, and the presidential portrait that struck me was the abstract one of President Kennedy. Not a traditional one, but one of him looking down, and pensive. It had big strokes, and was a “looser” style painting. I still enjoy seeing it, and it is probably the first piece of art that I had appreciated.
I found this on Wikpedia, about that painting:
President John F. Kennedy’s official portrait was painted posthumously by Aaron Shikler by request of Jacqueline Kennedy in 1970. It is generally analyzed as a character study. Unlike most presidential portraits, Kennedy’s depicts the president as pensive, with eyes downcast and arms folded. According to Shikler, Jackie’s only stipulation was for him to create an image different from “the way everybody else makes him look, with the bags under his eyes and that penetrating gaze. I’m tired of that image.” Shikler drew a few sketches based on photographs, one of which was inspired by Ted Kennedy’s somber pose at his brother’s grave, his arms crossed and his head bowed. Jackie chose that sketch as the final pose.[8] Shikler also painted the official White House portraits of First Lady Jacqueline Kennedy and the Kennedy children.

This being said, I like the portraits of President Obama and his wife Michelle. I think the Kehinde Wiley did an incredible job with his face, and I like the meaning of the flowers and leaves around him, referring to his heritage of being born in Hawaii, life in Chicago, and so on. I also like the portrait of Michelle, by Amy Sherald, the meaning behind the dress, and the strength that her pose and arms show. I think both portraits are unique and unlike other portraits, which is probably why I like them.
I do not however care for the fact that the artist that painted the President’s portrait, has a few paintings with African American women holding severed heads of white women. I appreciate the fact that I live in a country that he can paint such paintings, but I also appreciate the fact that I do not have to like them, and can tell the world in a blog, or facebook post. And I also wonder if I was an artist that only painted white subjects, and then had a painting holding a severed head of a black person, how that would go over. Artists have always pushed the limits and made a statement, and will continue to do so, and that’s exactly what this artist is doing.
Kudos to Kehinde Wiley, and Congrats to Amy Sherald. 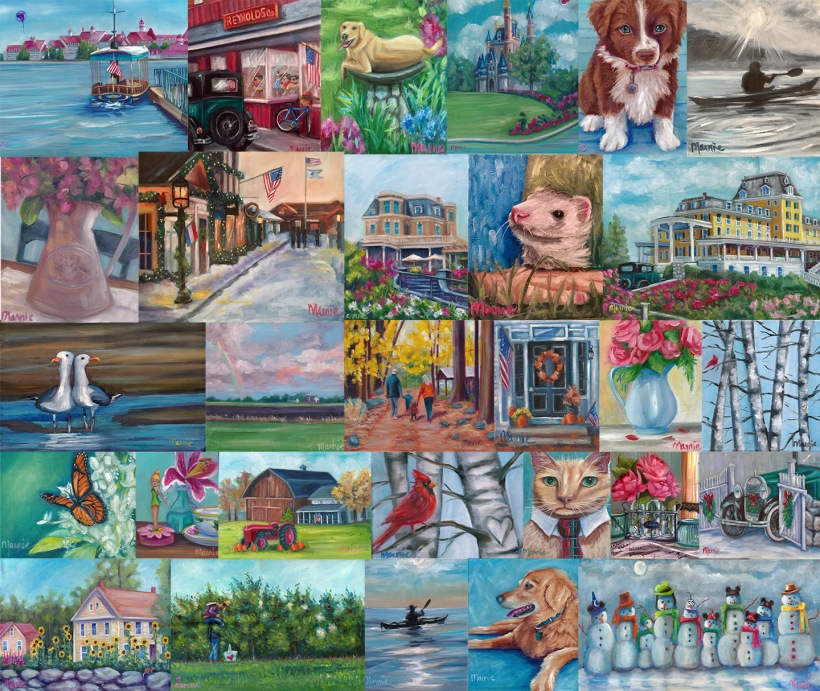 Hola!   I am gearing up for my 6th painting challenge, this September.  This is where I try to create and post a painting every day for the whole month.  This challenge is orchestrated by an artist from California, and there are about 1,000 or more that paint with me. I am not sure what inspired her to create this challenge, but there is a movement of “daily painters”  that paint every day.

I do try hard to paint every day but I find it difficult to finish a painting in one day, and would not consider myself a “daily painter”.

My painting process is that I typically start my painting, let it dry overnight and then maybe finish it the next day.  If it is a large painting it may take a few additional days. After its finished I may add some highlights a few days later, so they are fresh and bright.
Working in oils means that they do not dry quickly, and over mixing can create what we call “mud”.  If you look at a mud puddle you will understand why we try to avoid making mud.  So that’s why my process typically takes a few days.

That being said, I am fervently painting trying to get ahead so I can post a new painting daily.  Add in a few commissions, and I have a lot of painting to do!

I hope you will follow me on my journey in September! 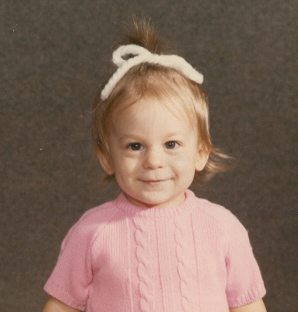 It’s this little girls birthday today. This little girl grew up an only child but was lucky to have 3 boys and parents move in next door that changed her life. They made her into a tom boy. Between those boys and a Dad that let her work in his garage, these people shaped her into a girl that enjoys a nice car, knows how the car runs and is pretty independent. (And has never minded mud)

This little girl married her high school sweetheart, and became a mom to two kids she adores. This little girl worked the daily grind for years, till being laid off and had a chance to follow a dream. This little girl became obsessed with Disneyworld. Bringing her kids there as much as she could. And when she couldn’t go she dreamed of going. This little girl now spends her days painting Disney subjects and whatever else catches her fancy.

This little girl always felt like a little girl till the last year. This last year has been pretty rough. Her Mom died in November, and then being an only child, it was on her to be there for her Dad. Then while they were still grieving, her Dad was diagnosed with an aneurysm requiring surgery. While waiting for the surgery, her husband was in a serious accident requiring emergency surgery, an ICU stay and weeks of healing, with an additional surgery still to come to conclude healing. So although this little girl has had a wonderful life she appreciates, this birthday is a bittersweet one.  Its her first without her Mom, and is the first as Matriarch of her family.

That’s what I consider myself to be.   I enjoy learning, but honestly sometimes I get overwhelmed by how much work it is to be an artist.  I started my working career, as a Civil Designer, working for a local casino.  After being laid off, with support from my hubby, I began painting.

I think its great to always be learning.  I paint daily, believing the old quote “practice makes perfect”, and I have seen lots of improvement, which I think is a good thing.  Besides painting an artist has to learn to market themselves.  Paintings don’t sell themselves usually, unless you are extremely lucky.  So in addition to learning to paint, I am also teaching myself marketing, business management and book keeping.  That’s a lot of hats to wear for someone just wanting to paint.

How is that working for you?

Well, most of the time, it works well.  But when there is stress in my everyday life it spills over to my art, and it is just plain difficult.  Its not easy for me to create something while stressed.  Somehow it gets into my head, and the doubts come in and I just stall.  So I am currently trying to get through life’s everyday struggles and still create beautiful art.

Does anyone else struggle with stress affecting their art?  Or are you lucky enough to paint through it all?  I am just curious to see if others are like me.

So tomorrow I will start my day and hope for my brush and paints to take me on a journey to create something wonderful.  Because I am always learning…. and that is a good thing.

Commissions are wonderful, and I am always grateful for them.  I have had a few people send me a photo to create a painting from, and I am working on them now.  One is of the Charles W Morgan, and one is Cinderella’s castle.  I have about 4 commissions going right now,  and I don’t consider them finished until they are delivered.  What a feeling of accomplishment for me when I can cross one of the list that it is delivered!

It’s almost that time of year!  The sunflowers should be blooming soon!  These are the magnificent fields at Buttonwoods Farm, in Griswold, Ct.  Besides having wonderful ice cream, this time of year they also have incredible fields of sunflowers which they sell to benefit the Make a wish foundation.  These fields are an inspiration to artists like me, and you will see artists painting, and photographers taking pics of these stunning blooms.  I painted plein air last year, and am hoping to do it again this year.  For anyone that does not know, plein air is when you paint on site, out of the studio, braving the elements.

This was me last year, braving the harsh elements to create art.  Ok, maybe it wasn’t harsh elements, but it was certainly fun!  Sadly I could not reward myself with ice cream at the end, as the lines are so long.  But luckily I live nearby, so I can rectify that easily at another time.  For those that make a special trip, the ice cream is worth the wait.  I am hoping to paint plein air again this year, with more artists, so you may see me there early one morning.  If you do, stop by and say hello!
My Dad had his heart surgery and is home recuperating, and my daughter is also home for the summer.  So I am creating a balancing act finding time for family and painting.  Hopefully I will have lots more time soon to create!

That’s it for now… my first blog post on wordpress is now published.  Hope you enjoy it and come back for more!  Until then…